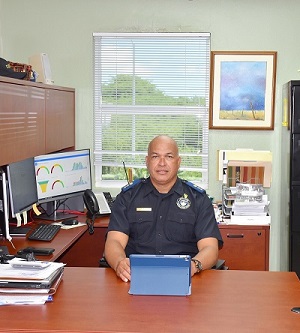 Delays, missing packages, undelivered medicines and mounting complaints about poor service by courier companies since COVID-19 struck are largely due to a lack of resources and poor preparation for the crisis over the last few months, customs has said. But importers themselves need to give the right information to agents and couriers, given the growth in imports and the fact that Christmas is coming, a senior official told CNS.

While some parcels are currently stuck at Customs and Border Control, CBC Deputy Director Kevin Walton told CNS that there is no benefit to them to hold imports, not least because they cannot collect the duty until the packages are released. He said that if any courier service blames CBS for a hold-up, the customer should ask for a declaration number.

“If they can’t give you one, the hold-up is not at customs,” he said.

Following concerns raised by readers and indications that the problem is with the courier services, CNS attempted to contact two of the international companies based in Cayman that had been the subject of most of the complaints. After efforts to get someone on the phone or via email locally failed, CNS made contact with their regional offices and managed to get some brief responses.

Although neither UPS nor DHL gave full explanations for the catalogue of problems with deliveries here in Cayman, they both committed to improve their service in the face of an “immense increase” in volumes.

Pam Duque Rai, from DHL’s communications department based in Florida, said the company was investing in international network infrastructure and technology systems to provide customers with what she said were the excellent service levels that they have come to expect.

“Although our industry has not been immune to the challenges of delivering within the COVID-19 environment, we have implemented new health measures to keep our employees and customers safe while following our business continuity plan to manage the immense increase in shipment volumes through our network. Any specific shipment delays are addressed directly with our customers,” she stated.

Meanwhile, Alida Velez, from UPS Americas, told us via email that they had experienced some challenges over deliveries.

“While the vast majority of our services continue with the same time commitments our customers have come to expect, we are addressing some delays with deliveries in the Cayman Islands,” she said. “To allow for additional time to make deliveries because of the pandemic, UPS temporarily modified the UPS Service Guarantee effective March 26. For customers waiting for their packages, we are working hard to deliver their shipments during this challenging time.”

But a lack of preparation for the significant increase in smaller imports as a result of the COVID-19 pandemic combined with new importers who are not familiar with the paperwork, as well as UPS’ financial issues, have created the current troubles.

Walton said the pandemic, the change in technology at CBC, the online shopping spree fuelled by the lockdown, the flow of pension cash and the end of weekend trips to Miami, were all part of this perfect storm for clogging up the system. In August alone there were more almost 23,000 individual imports, he revealed.

While CBC activated its continuity plan in the face of the health crisis, this has not been the case for all stakeholders. Walton told CNS that there were challenges with courier companies that have not invested the necessary resources or adapted their business models to suit the new environment.

But there are things that importers can do to get their parcels quicker. “Around 40% of all packages coming via courier don’t have the right paperwork,” Walton said, noting that people shopping online should have all the paperwork and know which courier service will be delivering their packages.

“Shoppers have the invoices, not the courier,” he said, adding that importers must also tell their courier or shipping agent if the goods are perishable or critical items such as medicines. He said the onus is on the shopper to contact the courier service ahead of delivery to give them all these details. However, he accepted that calling and emailing at present was a problem and that the only solution might be to attend the offices in person, despite the long queues.

Walton said it is really important that courier companies, the agents and private importers all do what they can to get things right. Imports are still growing significantly and we are now just three months away from Christmas, which “could be a nightmare this year” if everyone in the chain is not fully prepared, he warned.

CBC is using sophisticated tracking technology and intelligence-led analysis to understand what is coming across our borders and from where, allowing management to direct staff to where they are needed most. But the system needs everyone to buy in for it to work smoothly.

Walton said that although the CBC has been in communication with and assisted merchant importers for more than two years about the technology it now uses, some of them have still not got things right. He said many merchants have still not invested in the technology they need to make importing efficient, which clogs up the system. But he said CBC continues to do all it can to assist private and larger importers, working with them to clear the blocks in the system and get people’s goods to them as quickly as possible.

Walton explained that the next step for CBC is to set up a dedicated customer service section, which will be largely for importers, to help people understand and use the system properly. Currently, customs officers deal with customer service queries and complaints, and when they are doing that, they are not able to process the imports, he said.