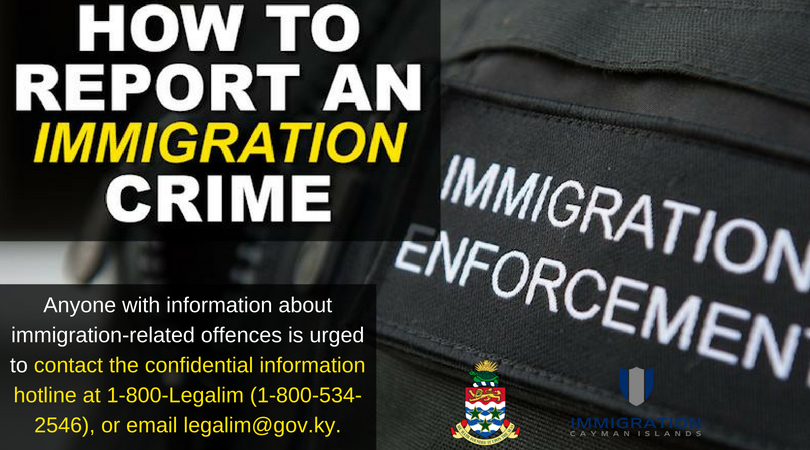 Through proactive patrols and operations, DOI officers enforce the law to enhance public safety, border security and the integrity of the immigration system.

After reviewing the final data collected from the department’s recent Immigration Amnesty campaign, officials report that a total of 185 overstayers fled the Cayman Islands during the month of August 2018.

“The revised number of 185 includes the previously reported 14 persons that voluntarily turned themselves into the Enforcement Division,” Deputy Chief Immigration Officer, Gary Wong, explained. “The additional 171 individuals are comprised of those that simply left via airlines without notifying the department, and were identified as part of the post-amnesty assessment.”

The longest period of overstaying was found to be 13 1/2 years, with 122 individuals found to have overstayed for less than one week.

“This year’s immigration amnesty was a component of a wider effort by the Cayman Islands Government to reduce crime as well as criminal activity,” Mr. Wong noted. “The successful campaign also allowed for employers and the public to play a critical role by providing information to help officials locate wanted individuals.”

Throughout the month of August, officers with the Enforcement Division continued to actively pursue those persons in breach of the Immigration Law, and those who did not take advantage of the amnesty period.

On 16 August 2018, enforcement officers carried out a targeted operation in the vicinity of Spotts, Newlands. The suspect, a male Jamaican national, was found working at a residence in the area, and was arrested on allegations of working outside the terms and conditions of a work permit.

On 23 August 2018, another targeted operation was conducted at a local business in the George Town area. Upon arrival, enforcement officers issued a search warrant to the business owner on suspicion of illegal employment. After officers proceeded to search the building, the female Jamaican national suspected of working illegally at the location was not found.

On 4 September 2018, an operation was executed to locate a Saint Lucian national in violation of the Immigration Law for allegedly overstaying on island.

Based on information received by enforcement officers, a search warrant was issued for a residence in the West Bay area. After reviewing the premises, the suspect in question was not discovered. On 10 September 2018, enforcement officers continued their search in the Midland Acres area of Bodden Town, but with the same result.

On 13 September 2018, after receiving new information, officers carried out an operation at a compound in Bodden Town. The Saint Lucian national was successfully located and was arrested by the Enforcement Division.

“When officers are unable to locate a suspect, our efforts don’t simply stop there,” Mr. Wong said. “The division continues to actively pursue all leads, in addition to information provided by the public, until the individual is identified and subsequently arrested.”

He added: “We thank the public for their ongoing support, as enforcement officers will continue to crack down on illegal immigration and bring all offenders to justice.”

Anyone with information about immigration-related offences is urged to contact the confidential information hotline at 1-800-Legalim (1-800-534-2546), or email This email address is being protected from spambots. You need JavaScript enabled to view it..